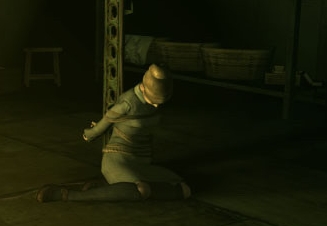 Push left to struggle. Push right to struggle. Face it, you're screwed.
"That timer isn't a catalyst to keep the action moving along. It's just seconds ticking away to your death. You're only still playing instead of watching a cutscene because I want to watch you for every moment that you're powerless. To see you made humble. This is not a challenge. It's a tragedy."
— The Narrator, The Stanley Parable
Advertisement:

Video games are all about putting the player in control, right? Not always, actually, but some games do try to go a bit farther than usual, and allow the player to be in control even when you're screwed.

In some games, there is a point at which you can be captured or restrained, and not able to move around, but you can still control your character. This might mean being able to wriggle around in your bonds, walk around in your prison cell, what have you, until you either die or are rescued. Other times, you are able to bring about your own rescue (Button Mashing freeing you from being frozen is actually fairly common).

In certain squad-based games which feature a Combat Resuscitation mechanic, running out of Hit Points may put you in a state of Controllable Helplessness where you can only crawl around, with a few examples also letting you use a pistol to try to defend yourself. In these cases, you'll eventually bleed out unless a teammate revives you... hopefully they're feeling cooperative if it's a multiplayer game, and aren't subject to Artificial Stupidity if it's single-player.

The point of allowing this "freedom" even when the player is helpless is sometimes to drive the feeling of helplessness home. It's one thing to be locked in a prison cell and be told that you lose. It's another thing to be locked in it, be able to move around freely within the cell, and eventually get executed anyway. The latter implies that you could have gotten free, making your inevitable loss hit you hard in a way that an immediate loss would not.

On the other hand, this can be seen as the surest sign of a heavily scripted game when the helplessness is unavoidable. Depending on how the player perceives it, such use of this trope could be seen as little more than a glorified cutscene in which you happen to be in control.

Sister trope to Injured Player Character Stage, in which the player character gets injured in the course of the storyline, affecting their abilities in the gameplay. Compare Hopeless Boss Fight, Fission Mailed and the Unwinnable tropes. An unavoidable loss or disaster is not this trope; that is Stupidity Is the Only Option. See also Expository Gameplay Limitation, in which the player's freedom is restricted in a less dramatic fashion.

One More Extra Stage forces you to select a specific boss song, and on the hardest difficulty to boot.

One More Extra Stage forces you to select a specific boss song, and on the hardest difficulty to boot.