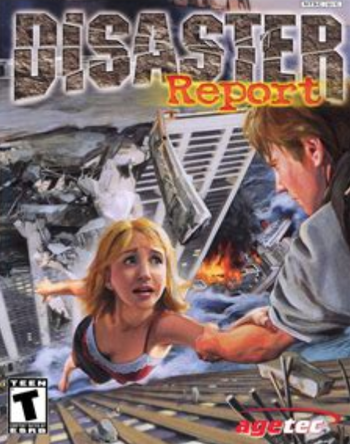 Disaster Report is a 2002 survival "horror" game for the PlayStation 2, the beginning of a series known in Japan as Zettai Zetsumei Toshi (The Desperated City). It's unique in that it nixes the monsters and blood for an earthquake scenario, thus, helping establish the Disaster Survival subgenre. The game has several quirks that make it seem more like an experimental PS1 game than a typical PS2 title of the time. The thing just screams budget issues, with cheap sound effects, unintentionally campy voice acting, mediocre graphics, etc. Also had an amount of westernization and cultural censorship that seems strange by today's standards, for example, a handful of characters had their hair dyed blond for the sole purpose of looking white.
Advertisement:

The story concerns Keith Helm, a newspaper reporter who while commuting to work on Stiver Island, a deadly Earthquake hits. Stranded on the island, he teams up with a girl and together they explore the wreckage to find supplies and a way to be rescued. Over the course of the game, it is revealed that not everything is the way it seems- and that the earthquake may not be a purely natural disaster...

The gameplay is survival horror fare, albeit with a heavy emphasis on exploration and survival instead of horror; there are no zombies to kill, no monsters around the next corner, and you never even find a weapon, much less have the ability to fight. Instead, you're faced with the prospect of increasingly dangerous situations, like being trapped on a suspension bridge that's crumbling, escaping from a waterfront district that's rapidly becoming an underwater district, and more. A thirst meter acts as the primary focus of survival, requiring replenishment from clean water supplies. The meter drains based on physical activity (if you run with a heavy backpack on, jump around, climb, sprint instead of jog, and so on, it drains faster). There's also a health meter, depleted from injury and dangerous activity, that can only be replenished with juice or the exceedingly rare first aid kits. Various gear can be found that provides benefits, like a helmet that protects against falling debris or a pair of gloves that making climbing easier. Puzzles are generally disguised lock and key affairs, and basic platforming is required to progress. The game also has a simple item assembly system which allows you to make more advanced items like a lamp helmet or a water purifier.

The game provides a surprising amount of depth and replayability despite the (many) obvious flaws. The game had enough of a cult following to warrant 3 sequels.

Not to be confused with Disaster: Day of Crisis, a later game that also dealt with natural disasters.