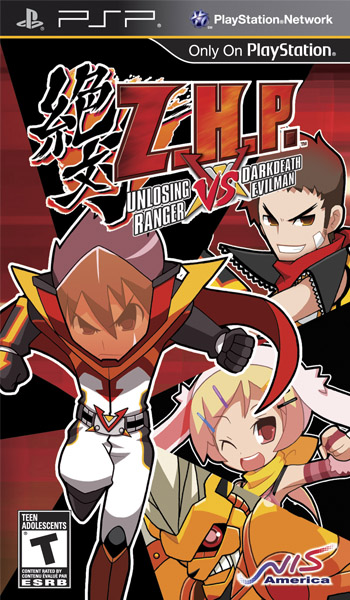 Zettai Hero Project, or Zettai Hero Kaizou Keikaku in Japan, is a PlayStation Portable video game created by Nippon Ichi which, unlike most of their games, is not an SRPG. This one is a Roguelike, putting it closer to the Mystery Dungeon (with Pokémon Mystery Dungeon being the biggest example) series of games. The full English title is Z.H.P. (Zettai Hero Project): Unlosing Ranger vs. Darkdeath Evilman.note This is actually causing problems with people buying it. The periods are part of Z.H.P., and most stores' systems will not see it as a result for ZHP.

It's that time of the year again. The Demon General, Darkdeath Evilman, has kidnapped Super Baby, the infant savior of the world, and threatens to destroy Earth! But of course, the world's most beloved hero, the Absolute Victory Unlosing Ranger, heeds the call to defeat Darkdeath and save the world!

In his last act, he gave his morphing belt, and with that his super powers, to a young teenager who just so happened to have witnessed the scene. With the powers of the Unlosing Ranger at his disposal, this new hero must save the world in his stead!

Saved from the brink of death by the World Hero Society, our silent young hero meets his instructor Etranger and Pirohiko, the ghost of the previous Ranger. With the world in danger, the lovable weakling has no choice but to train and train until he can defeat Darkdeath Evilman and save the world!

No relation to Kaizo Mario World.

Together with Makai Kingdom, this game is slated to be remastered as a Compilation Rerelease through Prinny Presents Vol. 2 in Spring 2022 for the Nintendo Switch and PC.