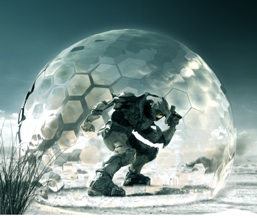 It was the buzz of the internet!
Advertisement:

A specific and often striking type of Deflector Shield, often made out of Pure Energy, that takes the form of geometric shapes which connect to form the overall shield — often hexagons, as they tessellate conveniently well. It's not mathematically possible to create a sphere-like shape from regular hexagons alone, but one can come close by throwing in a few pentagons (twelve, for a complete sphere), and some objects in the real world (like fullerene molecules and soccer balls) have such structures. Named after the hexagonal wax cells of honeycombs.

In older games or computer animation, this may have been because an object composed of hexagons was much easier to convincingly render than a sphere; it now mainly owes its existence to Rule of Cool. A favorite of the Barrier Warrior. This design actually has a veneer of plausibility, since two-dimensional hexagons and pentagons can be used to enclose a three-dimensional volume without leaving cracks, and with excellent distribution of stress