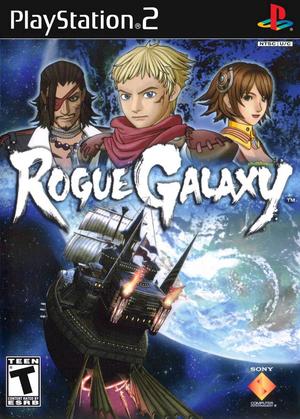 Second star system to the right, then straight on 'til morning.
"An eternal voyage through the murky blackness, sprinkled with billions of points of light. Each with its own history, written there in the dark. This is a story inscribed upon one such point of light. A story... of heroes."
Advertisement:

An Action RPG for the Playstation 2 developed by Level-5, released in 2005 in Japan and 2007 elsewhere, Rogue Galaxy can basically be summarized as a combination of Dark Cloud and Skies of Arcadia IN SPACE.

The story follows Jaster Rogue, born and raised on the desert planet of Rosa amidst the sprawl of galactic turmoil: purportedly for the protection of the people, the Longardian Federation has set up an occupation of Rosa, much to the locals' displeasure. Rosa, being a resource-rich world, has practically been enslaved by Longardia for the express purpose of combatting their rival, the Draxian Empire. Not happy for any of this, Jaster wishes to leave the planet in the dust and explore the galaxy, with the ultimate goal of becoming a space pirate.

Not wanting to stand idly by, Jaster joins the fray, only to be outnumbered and conveniently being given aid by Desert Claw, a legendary bounty hunter. After repelling most of the attack, Desert Claw parts ways with Jaster after giving him his sword, and immediately afterwards Jaster is mistaken for the bounty hunter by a group of space pirates who invite him into their crew...

Rogue Galaxy was released to positive critical acclaim, spurring the release of a Director's Cut, which was also made the normal version for North American and European releases, subverting the general rule of the updated rerelease only being distributed in the original country.

Not to be confused with Rogue Legacy, or with Rebel Galaxy.