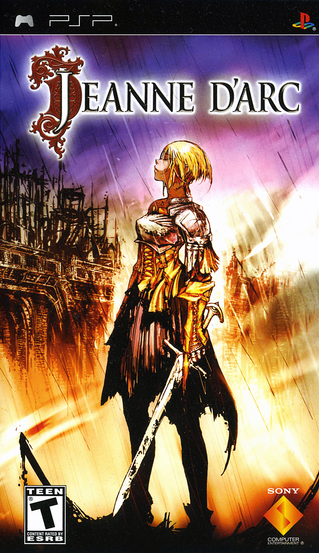 Jeanne d'Arc is a 2007 Turn-Based Strategy Role-Playing Game for the PlayStation Portable, from the very talented folks at Level-5. It's based on the reimagining of Saint Joan of Arc's involvement in the Hundred Years' War as part of a greater war between mankind and the "Reapers," demonic creatures from the Netherworld. Cue the Henshin Hero transformations, the half-human warriors, magic spells and, of course, the mystical armlets that make all of this possible.

Often called Final Fantasy Tactics Lite (although it has much more in common with Fire Emblem, down to the "attack -> counter" style of melee), Jeanne d'Arc is a surprisingly fun and intuitive Strategy RPG, where the main appeal is the character transformations into mighty, armored soldiers. The transformations available to each character are limited to the gems on his or her armlet, and they last only a few turns; however, they come with increased stats, special attacks, and the ability to move and act indefinitely as long as the character keeps defeating enemies. In addition to this, players can take advantage of elemental affinities between allies and enemies, a huge variety of class-specific skills, and the "Burning Aura," a spark of light created by physical attacks on an enemy, and which the other characters can receive to enhance their own power. Combat is generally quick and easy to follow; unlike other strategy RPGs, where character order is determined by their agility or speed, battles are split evenly between "Player Phase" and "Enemy Phase," in which either side gets to move and act at its leisure. Although this allows the player to gang up on enemies or retreat to heal, the enemy side can and will be just as ruthless.

There are no "generic" characters, as everyone in the party is part of the plot at one point. Therefore, defeated characters don't "die," but merely fade away until the end of the battle (unless revived with an extremely rare spell from late in the game). Job classes are also ignored in favor of character-defined weapon classes: sword, spear, bow, knife, axe, staff and whip. Each of these classes can then equip Skill Stones, which can be bought from stores, earned through battle or synthesized by being fed to the game's mascot, Cuisses.

The plot, although not as complex as in other games in the genre, diverges enough from the historical Joan of Arc and the Hundred Years War to provide a multitude of plot twists and shocking surprises. It starts off with Jeanne, who, with her childhood friend Liane and their companion, Roger, becomes embroiled in the horror of war when an English detachment of soldiers and inhuman monster razes her village —acquiring in the process a mysterious golden armlet, from which she hears the voice of God commanding her to save France from the invaders. Thus begins Jeanne's fight to release her country from the grasp of both Englishmen and the army of foul creatures they have somehow recruited. Along the way, she will meet with various historical figures such as Étienne de Vignolles, aka La Hire; Arthur de Richemont, and even King Charles VII, many of which appear as enemies, allies or even party members, though all have been equally reimagined to fit the fantastic setting of the game.