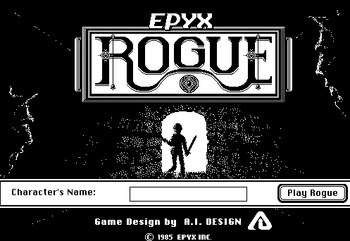 From the 1985 commercial re-release.
"Rogue is a visual CRT based fantasy game which runs under the UNIX+ timesharing system. Your goal is to grab as much treasure as you can, find the Amulet of Yendor, and get out of the Dungeons of Doom alive."
—'A Guide to the Dungeons of Doom
Advertisement:

, Beneath Apple Manor and DUNGEON are two roguelikes that both predated Rogue by two years, the one for which the genre is named. A top-down, dungeon crawling Dungeons-and-Dragons-like game, it used ASCII-based graphics to depict the player, the dungeon, and everything in it.

One of the unique features of Rogue was that each new game had a completely new, randomly generated map. Most games of the time, such as Colossal Cave, were completely pre-scripted or had limited randomness. This feature became one of the defining elements of the roguelike genre.

Rogue was originally written as a test of the curses screen handling library, which became one of the most widely used Unix application libraries. Epyx (the popular game publisher in the 80s) sold a commercial version using tile-based graphics.

and is free to play, while the Internet Archive hosts an online emulated version of the DOS version here

. Ports to modern operating systems can be found here

Tropes (of most this game is either the Trope Maker or Trope Codifier) found in the game include: