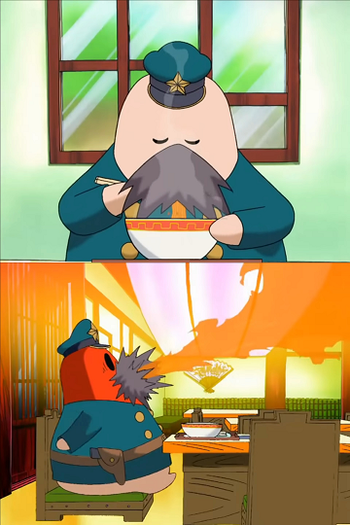 "It's like a hell in my mouth and everyone's been damned!"
— Minmax, Goblins
Advertisement:

Unaffected by Spice? Not these guys.

Excessively spicy food invariably results in a (usually metaphorical) blast of flame from the mouth of the diner, often after they have quickly turned red from feet to top of head (in the manner of a rising thermometer, sometimes with a distinctive rising "boooOOOP!" or whistling kettle sound effect). Sometimes it may be accompanied by a factory-like steam whistle or a fire alarm sound.

A common subversion is if one character in a cartoon tries to pull this off on another as a joke or part of an Escalating War. The intended victim will always have an insanely high resistance, while the perpetrator, trying it himself in disbelief, will feel the full force of the trope from the tiniest bite.

Video games often weaponize this effect, having a type of Powerup Food that lets the Player Character breathe fire.

While Blazing Inferno Hellfire Sauce is the most common cause, this can also be the result of consuming a Gargle Blaster, or anything cooked by a Lethal Chef. See also Oven Logic and I Ate WHAT?!.

In Real Life, capsaicin (the chemical found in 'hot' foods) works by directly stimulating the nerves responsible for detecting heat. This fools the brain into thinking the affected area is being burned and causes heat-related effects such as a flushed face and sweating. However, no spice can actually produce real heat, let alone fire - although there are certainly some foods that can make you feel like your mouth is on fire.

While foods containing menthol have the opposite effect, stimulating cold receptors, inversions of this trope involving freezing due to excessive mint consumption are rare outside of ads for breath mints. This is likely due to the fact that minty foods rarely achieve the levels of discomfort associated with capsaicin, unless you drink ice water while chewing particularly potent gum.

The fourth hottest pepper in the world is the Naga Viper pepper, coming in at a mouth-scorching, sweat-inducing 1,382,118 Scoville Heat Units (for comparison, the Jalapeño ranks 2,500-8,000). It has been trounced in March 2011 by the Trinidad Scorpion Butch T chili, which clocks in at 1,463,700 SHU; in February 2012 by the Trinidad Moruga Scorpion, which measures 2,009,231 SHU; and in 2018 by the Carolina Reaper, which is rated at 2.2 million SHU. Hot sauces made from any "super-hot" peppers (or even all of them) have to be stored in glass, because they all corrode plastic like (*click!*) that.

Not to be confused with the Unsatisfiable Customer, for whom the fire breathing is verbal, rather than metaphorical or literal.

From "Endless Reader". Little Blue ate something spicy and had to ask for water!

From "Endless Reader". Little Blue ate something spicy and had to ask for water!