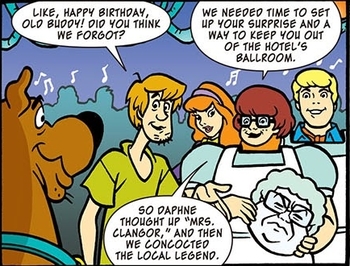 A very unexpected Reveal for a Scooby-Doo mystery.
Advertisement:

So, finally we have arrived to the climactic moment in the story: the main character is fighting the villain, the Love Interest is struggling to free herself from chains, and our hero's friends are coming to his aid... And then comes the Wham Shot. Both the "villain" and the Love Interest smile and cheer the protagonist, then a whole bunch of friends and seemingly "unrelated" characters enter and join them. Congratulations, the whole plot was an elaborate set-up, and everyone (except the protagonist) was in on it.

There may be varying reasons for this: sometimes it's done just for fun and teasing (for example, as a convoluted April Fool's joke or a pretext to a Surprise Party), or it may be the Love Interest's way of flirting with the main character. At other times, there are more serious purposes (like helping the protagonist deal with psychological issues or teaching him a lesson if he's giving himself airs); however, this doesn't prevent everyone else from having fun while doing it. In some instances, it can also overlap with Secret Test.

When a plot becomes overly complex and mind-bending for the media's format, for instance, when you have Conspiracy Kitchen Sink, supernatural events, and life-altering revelations in a comedy show episode, expect this trope to come into play soon.

In order to qualify for this trope, the staging has to be benign and created by the protagonist's true friends and loved ones. When a hero does this to trick the villain or vice versa, it instead qualifies as some sort of Gambit. Kidnapped by an Ally can overlap but is usually more serious in intent.

A Sub-Trope of The Ending Changes Everything. A Super-Trope to April Fools' Plot, Surprise Party and Scary Surprise Party. A Sister Trope to and often overlaps with False Crucible and Fake Mystery. May also overlap with Not-So-Forgotten Birthday and Mockspiracy. See also We Would Have Told You, But....

This is usually an Ending Trope, so beware of unmarked spoilers!