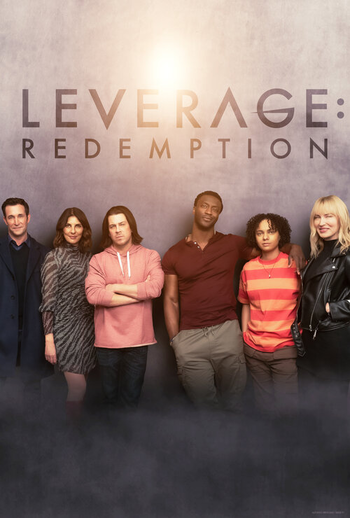 Let's go steal a revival series.
"I think I've deduced that you are a group of thieves who help people...let me be your inside man."
— Harry Wilson
Advertisement:

Leverage: Redemption is American action crime drama streaming television series, a revival and continuation of TNT's Leverage. The second Freevee original series, the first season began on July 8th, 2021note a day ahead of schedule with 8 episodes, with an additional 8 premiering on October 7th of the same yearnote also a day ahead of schedule.

Years ago, the rich and powerful took what they wanted until a band of the best thieves in the world came together to steal it back. Years later the three remaining members of Team Leverage are still hard at work righting wrongs, but times have been tough.

The rich and powerful are still finding ways to make money off of those beneath them, and now are finding new ways to do it. With help of an old friend and some new ones, these modern-day Robin Hoods will do what they do best: find those being crushed under the weight of corruption and greed, and provide them with some Leverage.

Returning as regulars are Gina Bellman as Sophie Devereaux, Christian Kane as Eliot Spencer, and Beth Riesgraf as Parker. Aldis Hodge, meanwhile, is reprising his role as Alec Hardison on a recurring basis. Rounding out the crew is Noah Wyle as Harry Wilson, a lawyer who after spending a career helping the rich stay rich realizes he's on the wrong side of the law and joins the crew in search of redemption, as well as Aleyse Shannon as Breanna Casey, Hardison's foster sister, a Gadgeteer Genius and "Maker".

The first teaser for the series can be watched here

with the full trailer released a few weeks later

. Another teaser was released for the second half of the season

a month ahead of its premiere date.