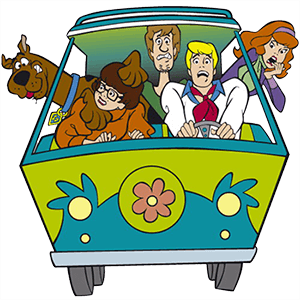 Taking them everywhere since The '60s.
Advertisement:

Some teams have their own outfits, others have a Team Pet, and then there's these guys and their (usually) Cool Car. This vehicle is the team's metallic pet: Most of the time, it will sport the team's or character's logo, have its own affectionate surname and be seen in almost every episode.

The transport is typically relative to the setting, and scope of the story. In a sea/space faring series it may be the team's main/mothership. A group of teenagers probably has a van they can all fit into. A solo adventurer probably has some type of one-seater.

For most characters, that one car is part of the team/family, and they don't care if it's a rusty old pile of scraps. In science fiction, if the vehicle has a sufficiently advanced AI/navigation system it can double as a Robot Buddy. In fantasy it may be a (named) horse, or mythological creature in which case it can double as a Team Pet.

It's not unusual for The Lancer or otherwise the 'coolest' member of the team to get a personal vehicle (see Cool Bike) that rides alongside the main car just to emphasize just how cool they are.

Sister Trope to Theme Mobile, where the vehicle sports the team colors but isn't iconic/emotionally linked to the character/team. See also Global Airship, which is usually a Signature Team Transport for a party of RPG heroes.