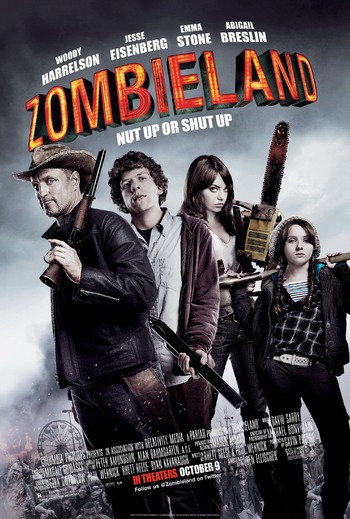 "My mama always told me someday, I'd be good at somethin'. Who'd'a guessed that would be zombie killin'?"
"Oh, America. I wish I could tell you that this was still America, but I've come to realize that you can't have a country without people. And there are no people here. No, my friends. This is now the United States of Zombieland. It's amazing how quickly things can go from bad to total shitstorm."
— Columbus
Advertisement:

Some zombie films strive to evoke the terror of endless hordes of ravenous unstoppable undead advancing upon helpless, hopeless victims. Some show an exploration of the effects on civilization when The Virus moves in. Some spend their time showing military forces overrun by an enemy they're unprepared for. Some use the zombies as a metaphor for victims of a materialistic, consumerism-driven society that gorges itself on pop culture and technology. Some are about a divided capitalist society headed by greedy fat cats, where the poor are exploited, or a desperate battle for survival. Some are even about the socio-political ramifications and aftermath of a zombie outbreak. A few try to trace the interpersonal problems (or lack thereof) that can result from a zombie attack.

Zombieland is a little more concerned with knocking their fuckin' teeth in.

It's the end of the world, so you might as well have some fun. You've seen the movies, now you get to live the life. Load up on shotguns, ammo, sledgehammers and banjos, because this is Zombieland — where your town is your name, you must always beware of the bathroom, and your biggest competition for Zombie Kill of the Week is a cheerful, cardigan-wearing nun.

Released in 2009, Zombieland was directed by Ruben Fleischer and written by Rhett Reese and Paul Wernick (who would later write G.I. Joe: Retaliation and the live-action adaptation of Deadpool) and stars Jesse Eisenberg, Woody Harrelson, Emma Stone, and Abigail Breslin.

A television series was proposed for Fox's 2012-2013 season. Fox passed on the show, but Amazon developed a pilot. The prospective series was then rejected by Amazon after fans voted it down on the website, and it is now no longer available due to licensing concerns.

A sequel, Zombieland: Double Tap, was released on October 18, 2019, around the 10th anniversary of the original film's release, with the original cast, director and writers returning.

Has no relation to the similarly named anime series Zombie Land Saga, although the makers of that anime are aware of the similar name and eventually cross-promoted

Trope up, or shut up: