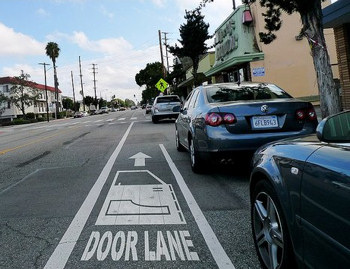 There's a motorcycle zoomin' by me
Watch what happens when I open my door!
— "Weird Al" Yankovic, "Traffic Jam"
Advertisement:

A character is coming down the sidewalk. Maybe they're really moving because they're being chased by the cops. Maybe they're just strolling, but they aren't watching where they're going. Suddenly, the door to a car parked on the street swings open, and *THUD* — they slam right into it. Also known as "getting doored" or a "door prize" by cyclists.

A common variant is to have the tripper on a bike and be sent head over heels. Bonus points if the door opener leans out and delivers a Quip to Black. A cousin to the Offhand Backhand. Compare with Low Clearance.

Not to Be Confused with a tripwire for use on cars. And no, Toyota doesn't have a car called the Tripwire. Sub-Trope to Tae Kwon Door. Compare with Car Fu. Contrast with Pedestrian Crushes Car. See also The Door Slams You.