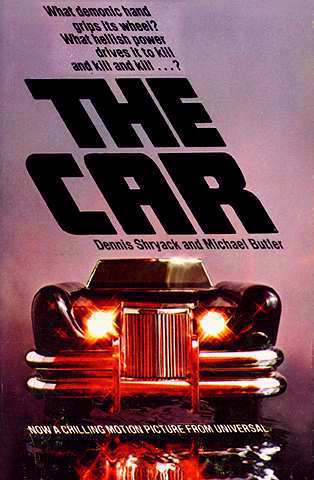 The 1977 film The Car is exactly what would you get if you crossed Jaws with Duel, minus the Spielberg.

Out of nowhere, a car appears in the fictional Utah town of Santa Ynez. But not just any car: It is a heavily modified black 1971 Lincoln Continental Mark III, which proceeds to mercilessly run down local citizens. The local police force is baffled by this, especially given sketchy claims from eyewitnesses that the car had no plates, and much more oddly, no driver...

Enter Chief Deputy Wade Parent (James Brolin), who must find out who or what is driving the damn thing and how to stop it, and hopefully protect his kids, his girlfriend, and, well, everybody else from this motorized menace.

A direct-to-video sequel, The Car: Road to Revenge was released in January 8, 2019. This one, set in a Cyberpunkish-future, focused on a district attorney who was viciously murdered coming back to life as the eponymous car. Ronny Cox cameoed.

There's nowhere to run, so you might as well read these examples: