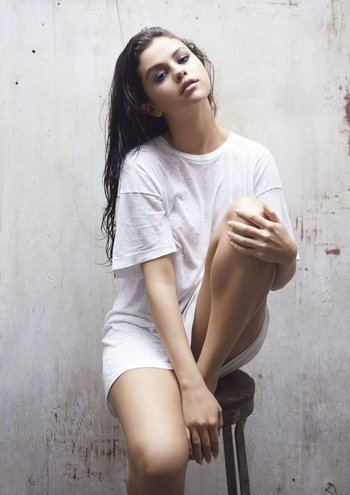 Associated acts:
Influences:
Who says you're not perfect?
Advertisement:

After starring in the main cast of Barney & Friends for two years, Gomez later came to prominence as a teen idol associated with Disney projects, most notably the kidcom Wizards of Waverly Place. Gomez portrayed series lead Alex Russo over a span of four seasons, two television movies and a crossover with The Suite Life on Deck. She previously recurred on Hannah Montana as Mikayla, the titular character's rival.

Towards the end of her tenure with Disney, Gomez began transitioning into more adult projects, like the 2012 Harmony Korine film Spring Breakers, and the 2013 thriller Getaway, opposite Ethan Hawke. She also continued working on kid-oriented works during this time, lending her voice to 2012's Hotel Transylvania (and its 2015 sequel), as well as co-starring in the Beverly Cleary adaptation Ramona and Beezus.

Though she doesn't actually appear in the series, Gomez serves as the executive producer of Netflix's 13 Reasons Why, based on the novel of the same name by Jay Asher. Though contentious among many in its approach, 13 Reasons Why became a streaming sensation, and was quickly renewed for a second season after its debut in 2017.

In addition to her acting career, Gomez is also well-known for her music. While at Disney, she became the frontwoman of pop band Selena Gomez & The Scene, releasing three albums with them: 2009's Kiss & Tell, 2010's A Year Without Rain, and 2011's When The Sun Goes Down. Following the band's hiatus in 2012, Gomez released her solo debut —Stars Dance— in 2013. Her sophomore effort, Revival, was released in 2015.

Because of her extensive work with the company, Gomez is commonly associated with fellow Disney alumni Miley Cyrus and Demi Lovato, the latter of whom she grew up with while on Barney & Friends. Gomez and Lovato also co-starred in the Disney Channel Original Movie Princess Protection Program together.

Gomez' personal life has also been subject to widespread attention, having publicly dated Nick Jonas, Taylor Lautner, Justin Bieber, Zedd, and the The Weeknd. Gomez also gained the distinction of being the world's youngest UNICEF Goodwill ambassador in 2007.

with Selena Gomez & The Scene:

Who says you're not worth it