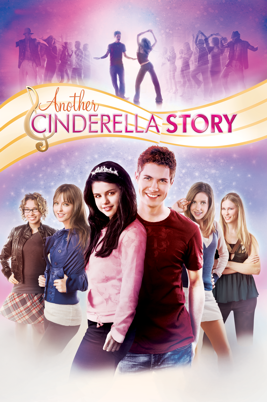 The spiritual successor to Hilary Duff's A Cinderella Story, Another Cinderella Story tells the tale of Mary Santiago (Selena Gomez), an aspiring, talented dancer living in servitude under her adopted mother/boss, the wealthy, influential Dominique Blatt (Jane Lynch) and her two daughters, Bree (Katharine Isabelle) and Britt (Emily Perkins). Mary doesn't think that her life can get any worse: the only thing making it better is her trendy best friend Tami (Jessica Parker Kennedy), who is the one who tells her about the new celeb in town, Joey Parker (Drew Seeley).
Advertisement:

Joey, on the other hand, is a famous, "young" dancer/singer who comes back to Los Angeles with his best friend Dustin/The Funk (Marcus Paulk) to remember why he started dancing - but all he can find is his Alpha Bitch ex-girlfriend Natalia (Nicole La Placa), who seems determined to get back together with him (much to his dismay).

At a masked black-and-white ball Dominique, Bree, and Britt try their best to keep Mary out of, Joey dances anonymously with Mary, and is left exhilarated even after she leaves to meet her midnight curfew. Determined to find her, he takes the Zune she leaves behind and sets out to find her.

Was apparently turned into a stage musical in Germany.

Tell me something I don’t know!