The Girl Who Fits This Slipper 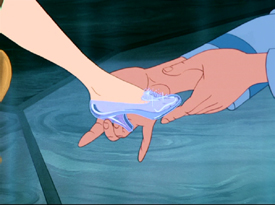 Looks like you have your future Princess.
Grand Duke: The Prince, Sire, swears he'll marry none but the girl who fits this slipper.
King: He said that, did he? Ha ha, we've got him!
Grand Duke: But, Sire, this slipper may fit any number of girls.
King: That's his problem. He's given his word, we'll hold him to it.
— Cinderella
Advertisement:

In fiction, some key pieces of clothing can only be worn by certain people. Shoes are a common choice, but other clothing will do. Thus if it fits someone, it can be used to ID them. Sometimes this can work in Real Life, but it's usually not enough evidence on its own. It might help if it's an accessory such as a dental plate or prosthesis that is custom-made to fit one specific individual's body.

Note it only counts when it's wearing it, not using it, or even touching it.

May overlap with Clothes Make the Superman (if the clothes bestow special abilities but will not work for just anyone), Suspect Is Hatless (if the clothing may not be that distinct).