Film / Anvil! The Story of Anvil 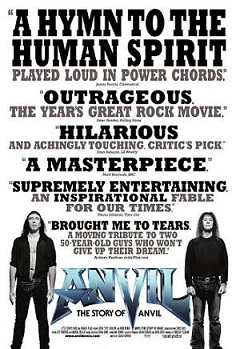 Anvil! The Story of Anvil is a 2008 rockumentary film by Sacha Gervasi. The film follows the life of Canadian Heavy Metal band Anvil, that saw some success in the 1980s, but, unlike their contemporaries like Whitesnake, Bon Jovi or Metallica, never got their big break.
Advertisement:

The film follows the band's key members, vocalist and guitarist Steve "Lips" Kudlow and drummer Robb Reiner (no, not that Rob Reiner) as Anvil goes on a poorly organized European tour. While it starts out hopeful enough, soon they find themselves playing in small clubs for no more than a dozen people. Back home, they begin working on their 13th album. Things start to look up as they collaborate with renowned producer Chris "CT" Tsangarides, but tensions are rising in the band.

Anvil! The Story of Anvil is a heartwarming story about two guys who have spent their whole life chasing their dream, keeping at it against all odds out of loyalty to their art and to each other.

"Tropes! The Story of Tropes":