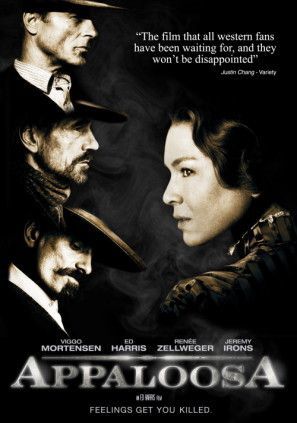 "Like my father, I'd been West Point, and I was good at soldiering. But soldiering didn't allow for much expansion of the soul. So after the war between the States and fighting Indians, I turned in my commission and rode away to see how much I could expand it. First time I met Virgil Cole was when I and my eight-gauge backed him up in a showdown he was having with some drunken mountain men. Virgil asked me right there on the spot if I'd partner up with him and his peacekeeping business. Which is why I was with him now, and why I still carry the eight-gauge. We'd been keeping the peace together for the last dozen years or so. And as we looked down on a town called Appaloosa, I had no reason to doubt we'd be doing just that for the foreseeable future. But life has a way of making the foreseeable that which never happens, and the unforeseeable that which your life becomes."
— Everett Hitch
Advertisement:

A 2008 Western film based on the Robert B. Parker novel of the same name. Directed by, produced by, adapted for film and starring Ed Harris as Virgil Cole, who along with his friend Everett Hitch (Viggo Mortensen) become lawmen of the town of Appaloosa, New Mexico in order to stop Randall Bragg (Jeremy Irons), a rancher who killed Cole's friend and the town's previous marshal, Jack Bell.

A woman named Allie French (Renée Zellweger) arrives in town as well, and soon, the mission to take down Randall Bragg becomes more complicated than any of them could ever imagine.