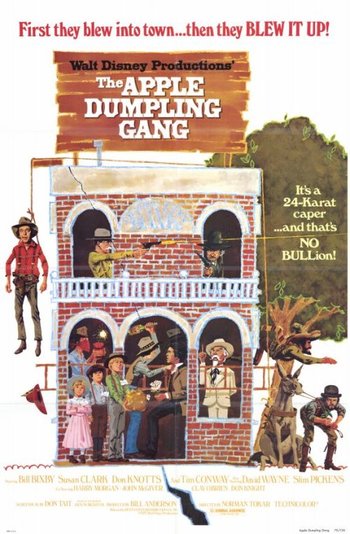 The story of the novel and movie follows a group of orphaned children during the California gold rush. They encounter Russell Donovan (played in the film by Bill Bixby), a gambler who reluctantly helps them, as well as Theodore (Don Knotts) and Amos (Tim Conway), a pair of hapless robbers who are after the gold the children have found. Dusty (Susan Clark), the female stagecoach driver, is persuaded to marry the gambler who is currently taking care of them, in an attempt to keep the children off the streets and away from those who would take their gold from them. Meanwhile, Amos and Theodore's former boss (Slim Pickens) also tries to steal the gold and ends up kidnapping the children.

Conway and Knotts play the leads in the sequel, in which Bixby and the rest of the original cast don't appear (save for Harry Morgan, who returns as a different character).

Tropes associated with the movie: