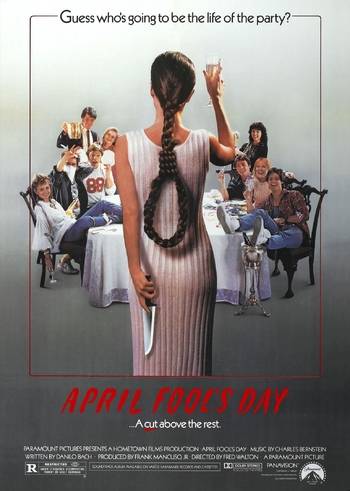 April Fool's Day is a 1986 Slasher Movie directed by Fred Walton, who also directed When a Stranger Calls seven years prior.

Muffy St. John (Deborah Foreman) is rich and she is about to inherit an old house on an island, where she decides to throw a party for her pals from college on April Fool's Day. But weird things begin to happen, as someone has planned a very different series of April Fool's pranks for the guests...

Got a loose Direct to Video remake in 2008 starring Taylor Cole and Josh Henderson.

Examples contained within this book. Gotcha!