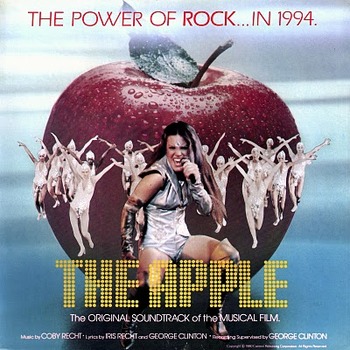 1994 was a weird year.
A 1980 dystopian, sci-fi, biblical-allegory showbiz disco-rock opera about an evil, all-powerful media mogul and his powerful Boogalow International Music (BIM) Mega-Corp, the young starlet fallen under his corrupting influence and the all-Canadian baby-faced hero determined to get her back out of his evil clutches.
Advertisement:

In the far off future of 1994, Canadian singer-songwriters Alphie and Bibi compete in the Worldvision competition. Despite being their being more talented and popular with the audience, Boogalow International Music (BIM) rig the contest to ensure their own band, featuring glam rockers Pandi and Dandi, succeeds instead. In spite of their loss, the wicked Mr. Boogalow attempts to sign the two of them to his label, enticing Bibi into a life of sinful rock and roll that is also slowly corrupting all of humanity. Bibi's popularity allows BIM to eventually take over the world as Alphie fights to get her away from Boogalow's diabolical control.

One of Cannon Films' first English-language efforts, in trying to capitalize on the success of The Rocky Horror Picture Show, Saturday Night Fever and Grease, its outlandish premise winds up having more in common with Brave New World, 1984, All That Jazz and Xanadu, with a little Godspell thrown in hastily at the last minute. In addition to having a very complicated and troubled production, it proved a major financial and critical flop, concurrent with the sharp decline of Disco.

Despite some rather heart-pumping songs and choreography, the prosaic lyrics, trippy aesthetic and off-the-wall script place it squarely in camp territory. However, starting with a 2004 DVD release, the film began to gather a small but dedicated cult following and started appearing on the midnight circuit, especially thanks to the Alamo Drafthouse. A hilarious commentary by RiffTrax was released in 2013.