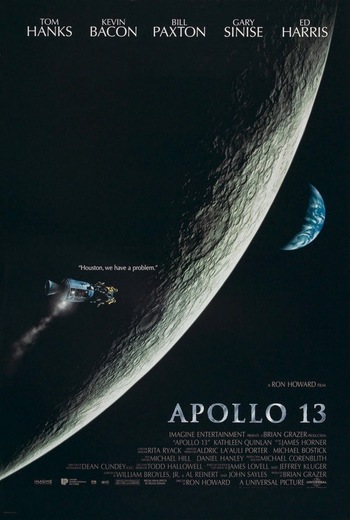 "We've never lost an American in space. We're sure as hell not gonna lose one on my watch! Failure is not an option!"
"Houston, we have a problem."
— Jim Lovell
Advertisement:

In 1970, the Apollo 13 mission was launched, headed for the moon. But this ill-fated flight would never reach its goal. Instead, its crew—Commander Jim Lovell (Tom Hanks), Command Module Pilot Jack Swigert (Kevin Bacon), and Lunar Module Pilot Fred Haise (Bill Paxton) would have to handle another crisis, one which endangers not only the mission, but their very lives. When an explosion rocks the service module, the crew soon realizes that the oxygen tanks aboard the Command Module Odyssey are leaking, forcing Mission Control, led by Flight Director Gene Kranz (Ed Harris) to abort the landing. The crew shut down Odyssey and power up the Lunar Module Aquarius (which normally could only support two men for a little over a day) to act as a lifeboat as they slingshot around the far side of the moon. Only ingenuity and the ability to keep their wits about them will allow them to get home safely...

Based on Jim Lovell's book on his experience, Lost Moon. In an interesting example, he shot the book idea past publishers, publishers got excited and sent it to filmmakers who immediately started bidding on it, and then someone called Lovell and said Imagine Entertainment was going to make a movie based on it. He hadn't finished the book yet!

Howard, producer Brian Grazer, and Hanks went on to produce the HBO miniseries From the Earth to the Moon.

Others in the All-Star Cast include Gary Sinise (Ken Mattingly, a last-minute scratch from the mission who has to help figure out a way to get the astronauts home), Loren Dean as John Aaron (the engineer who works with Mattingly to come up with a flight plan), Clint Howard as Sy Liebergot, and Kathleen Quinlan as Jim Lovell's wife Marilyn. If you watch this on DVD, Blu-Ray, or the Signature Collection Laserdisc, make sure you listen to the commentary track by the real Jim and Marilyn Lovell.

open/close all folders
Tropes # to F
Tropes G to L
Tropes M to R
Tropes S to Z
"Failure is not an option!"
Feedback

"I'm on the backup crew"

Jack Swigert is in the middle of a shower with his girlfriend when he receives a call letting him know he's been moved up to the main crew of Apollo 13. Needless to say, he's ecstatic about the news.

Example of:
Shower of Love

"I'm on the backup crew"

Jack Swigert is in the middle of a shower with his girlfriend when he receives a call letting him know he's been moved up to the main crew of Apollo 13. Needless to say, he's ecstatic about the news.