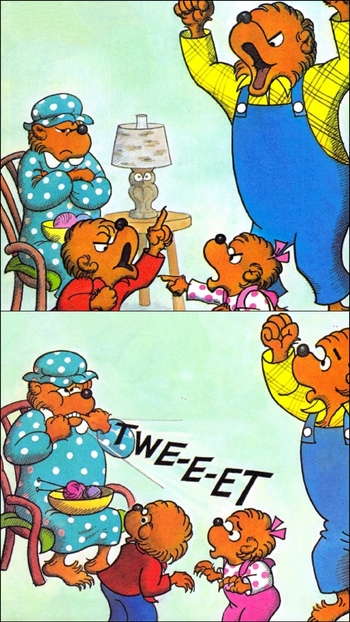 A bunch of people are babbling or arguing all at once. This often happens in some sort of crisis situation, especially when most of the people involved are just civilians and they don't know how else to react. Unfortunately, all their noisy anger/panic/confusion etc. is preventing any real conversation or coordination. (Moreover, it's preventing the audience from actually listening to any particular line of dialogue.) Somebody needs to take charge and act like a leader. The leader may start by simply talking to people, but he finds that no one can really hear him. In any case, he decides to make a really loud noise to make everybody else shut up. This may involve a loud "SHUT UP!", or it may involve some other way of making noise, such as firing a gun into the air.

This is surprisingly effective. It's very rare for the babbling crowd to ignore the leader or tell him to shut up in return.

Related to Big "SHUT UP!", but differs because it only applies when the intention is to shut up a noisy crowd, and it may involve non-vocal ways of doing so. One version is "Shut Up!" Gunshot.