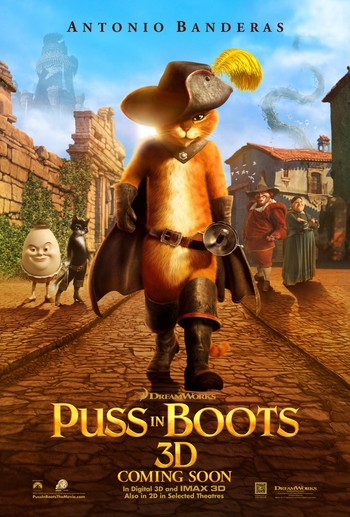 "Before the donkey and the green ogre, there was... Puss."
"Live for danger. Fight for justice. Pray for mercy."

Puss in Boots is a DreamWorks Animation film, serving as a prequel to the Shrek series and telling the Backstory of Puss in Boots. Guillermo del Toro is executive producer. It seems that Antonio Banderas is so sexy and awesome even as a cat, that Dreamworks went and made a theatrically released sequel just for his character.

The film shows Puss reunited with an old friend — Humpty Dumpty (Zach Galifianakis) who betrayed him once, and who convinces him to steal the magic beans from Jack and Jill (who are dangerous outlaws here) so they can climb to the castle in the clouds and steal the goose that lays the golden eggs. Along for the ride is Kitty Softpaws (Salma Hayek) a Classy Cat-Burglar, who becomes Puss's Love Interest and Rival. As a spin-off, it plays more with the conventions of swashbuckling adventures (appropriate, given that Puss himself is a Zorro Expy), though not as much as the parodic manner of the Shrek series.

, and here's the first theatrical trailer.

The Blu-ray and DVD release featured the short film The Three Diablos, which is set almost immediately after the events of the film.

There is a spin off animated series produced by Netflix titled The Adventures of Puss in Boots which focuses on Puss in Boots's life before the film. Following a long stint in Development Hell, a sequel, Puss in Boots: The Last Wish, is slated for release on September 23, 2022.

Puss in Boots provides examples of:

"The Three Diablos" provides examples of: