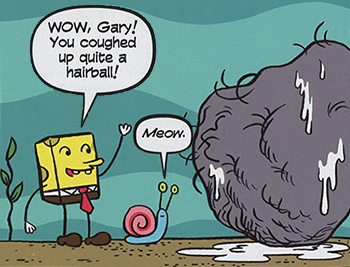 One of the very few negative things about cats is that, barring hairless cats, they cough up hairballs. This is because they lick themselves clean and end up swallowing a lot of fur, thereby needing to hack it up. It is particularly common for long-haired cats as they logically swallow more fur.

However, writers sometimes see one good thing about cats coughing up hairballs: it's an opportunity to make some gross-out jokes. This might be popular because cats are generally quite elegant and composed, so it could be used as a quick way to temporarily bring down the dignity of a cat for comedic effect. There's also the fact that, unlike when a human vomits, coughing up hairballs is actually normal for cats, so they can have the moment of gross-out humor without making anything too bad happen to the cat.

Sometimes, if a character doesn't like cats, is a snob/Neat Freak, is an incompetent cat minder, or is dealing with a mean cat, the hairballs might be one thing they complain about. The writers might also show an anthropomorphic cat coughing up a hairball to remind the audience that they are still a cat. If they want to go into really gross territory, they might have people find things in the cat's hairball.