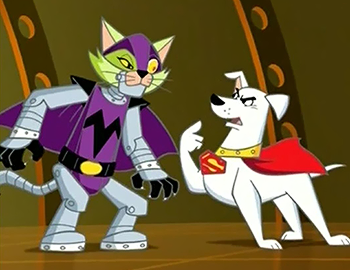 Works featuring mouse characters often use this trope even though there are dogs bred to hunt mice and rats. For example, mouse characters and dog characters partner together against cat characters. Kittens tend to be exempt from this trope, due to them stereotypically being seen as more cute and innocent than adult cats; consequently if a dog is chasing an adult cat the dog is often depicted as the "hero", whereas if a dog is chasing a kitten the dog is often the "villain".

Many aversions that feature cats and dogs in the same team or fighting on the same side, especially when the team or side is good, tend to have cats in the lower ranks than the dogs.