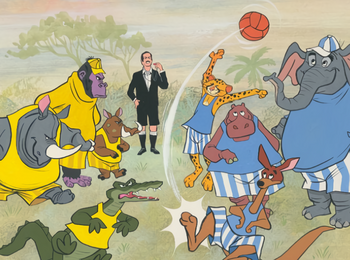 "When casting a picture with 'good guys' and 'bad guys', these are important considerations. The 'good guys' have to be small, ineffectual, cute, and associated with nonviolence. It doesn't matter if the real animal is that way or not. You are playing off the images in the viewers' subconscious, and if people grew up thinking a certain way that is where you must start. To have a mean and cruel kitten terrorizing a family of nervous, flighty bears is an uphill fight for everybody."
— From The Illusion of Life: Disney Animation by Frank Thomas and Ollie Johnston
Advertisement:

This trope is invoked whenever a work attempts to inform the audience who the good guys and who the bad guys are based solely on their species. When Species Coding is used as a metaphor for racism, it becomes Fantastic Racism.

Keep in mind that not every animal character in a work is necessarily going to align with the alignment most associated with their species. Aversions do occur and is completely up to the discretion of the individual creator. The examples are not meant to pass judgement on the value of the species listed, but simply to show the species with the alignment most often associated them when species coding is involved.

Not every work will employ species coding and thus alignment of the characters will remain independent of the character's species, leaving the species of each character to be an aesthetic choice rather than a visual cue towards their alignment. These works are not examples and should not be listed.

See also Good Colors, Evil Colors and Dress-Coded for Your Convenience for when you want to do this with Non-Non-Humans. See What Measure Is a Non-Cute?, where the "goodness" of an animal is correlated with its cuteness, and Unpleasant Animal Counterpart, when the "good" and "evil" animals are paired up against each other. Whenever you expect these codes to hold true, but they don't, you may be dealing with a Killer Rabbit. For the circumstances that could have led to this trope, see Good Taming, Evil Taming. For sub-tropes dealing with specific animals, look at the Pleasant Animals Index and the Scary Animals Index.