Literature / The Illusion of Life 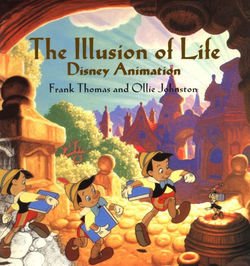 The Illusion of Life: Disney Animation note Originally titled "Disney Animation: The Illusion Of Life" prior to reprints is a Non-Fiction instructional/historical book that was commissioned by Walt Disney himself prior to his death to be written by Les Clark, who was with Disney all the way from Oswald the Lucky Rabbit up to Walt's death. However, Clark died in 1979 while doing preliminary research for the book. An attempt to complete the book was made in the 1980s in a large collaboration project with many surviving Golden Age and Dark Age Disney veterans, the project being spearheaded by two of Disney's Nine Old Men, Frank Thomas and Ollie Johnston.

The book was published in 1981, and has received universal acclaim and excellent sales, considered by many to be one of the best books on animation available. It has never been out of print since. There is also an abridged paperback "Popular Edition" of the book that removes around 200 pages of content and starts off right around the third chapter, with the section about the 12 Principles of Animation. It also received three companion books, also authored by Frank and Ollie; Too Funny For Words: Disney's Greatest Sight Gags, The Disney Villain and Bambi: The Story and the Film. A companion art book, Treasures of Disney Animation Art, was also published by John Canemaker (complete with identical cover art to The Illusion of Life, despite having completely different content), containing artwork that Frank and Ollie wanted to put into The Illusion of Life, but simply didn't have room for.

Also the Trope Namer of The Twelve Principles of Animation, which are discussed in the third chapter of the book.

Makes a great companion to The Animator's Survival Kit and Preston Blair Animation 1.

Has nothing to do with existential crises, nihilism (the books idealistic philosophy, like virtually all Disney works, is just the opposite) or with Platonic Cave.

Tropes Used By This Book: