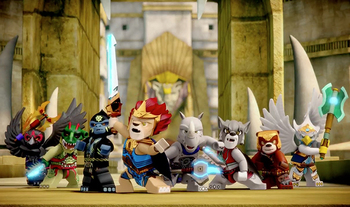 Legends of Chima is a franchise by LEGO. Previews of the TV show began in late 2012, and the show itself debuted in July 2013 on Cartoon Network.

Chima is a pristine land filled with many sentient animal tribes. Once at peace and in a state of balance, now they are at war over the CHI, a mystical energy source which gives a boost of energy to the animals and powers to their vehicles. The tribes have formed into two factions who now fight over the CHI. The Lions, Eagles, and Gorillas to protect the CHI. While Ravens, Wolves, and Crocodiles for gain. For Laval, prince of the Lion Tribe, this now involves fighting against his former friend Cragger who has become a leader of the opposing army.

The franchise also had a Massively Multiplayer Online Role-Playing Game called LEGO Legends of Chima Online, allowing the player to explore Chima and fight enemies as a member of one of the six main tribes. It barely lasted two years, closing down on June 1 2015.

Legends of Chima provides examples of: