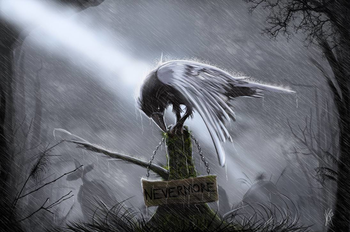 "In raven arithmetic, no death is enough."
— Ghostweight by Yoon Ha Lee
Advertisement:

They're dark. They sound ominous. They'll eat just about anything they can find, including dead bodies on the battlefield or corpses hanging from the gallows. A group of crows is a murder; a group of ravens is an unkindness or conspiracy.

In most of their fictional appearances, crows, rooks, and ravens are scary birds. They are often associated with death, danger, and even evil. In Fantasy and Horror works, ravens and crows are often depicted as spies, Familiars and Mooks of the Big Bad or as Feathered Fiends in their own right. The Haunted House or the scary Derelict Graveyard often has crows or ravens hanging about. Some works depict them as being neutral in morality, but still associate them with death, such as having crows or ravens act as servants of a death god.

Even in more realistic works, the presence of ravens and crows can be used to set an ominous mood and to signal death and danger, similar to Circling Vultures. The presence of a dead body might be indicated by a flock of ravens or crows. A sudden rush of crows might startle a character during a tense moment. In works where ravens and crows are not outright ominous, they'll instead be portrayed as annoying pests in vein of Pesky Pigeons.

Because they are so visually similar, in many visual media it can be hard to tell whether the bird in question is meant to be a raven or a crow. There is usually little if any difference in how they are treated. Scientifically speaking, ravens are crows, that is they're members of the genus Corvus. The term "raven" originally applied to the common raven, the largest and most widespread crow species, but is also used in the common name of some other species; rooks and jackdaws are also crow species with different common names. However, some works might single out only one of these species as being bad. A few works might even show ravens as good (or at least normal) and crows as evil, or vice-versa.

Compare to Circling Vultures, Ominous Owl and Pesky Pigeons. Not to be confused with Idiot Crows, where the crows denote stupidity rather than evil. May overlap with Clever Crows, although Clever Crows are more often benevolent. Also see Plague Doctor, as fictional portrayals often play up the Creepy Crows aspect of the costume.

Evil Tim has Beckoned Them!

Evil Tim has Beckoned Them!