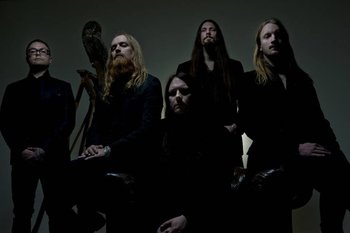 Katatonia is a Swedish metal band formed in 1991 by two friends in Stockholm. Since then, the band has moved through a variety of changes, both musically and lyrically, while maintaining their somber, depressive tone.

The principal men behind the band are, vocalist Jonas Renkse and guitarist Anders "Blakkheim" Nyström. Usually Anders writes the bulk of the music and Jonas the lyrics.

They are good friends with Opeth.

The debut album displayed the themes of sadness and loss, through a lot of mystical and grim imagery, alongside with anti religious statements. The mystical edge and satanic imagery, disappeared alongside the pentagram logo on Discouraged Ones, to be replaced with more introspective lyrics. Depression, loss, and other dark themes remained. With Viva Emptiness more abstract lyrics came around, and are now seemingly a staple.

Anders says they are a "happy sad band."

On June 18th 2012, the official forum was closed with no further explanation. Not related to the defunct British alt rock band Catatonia.