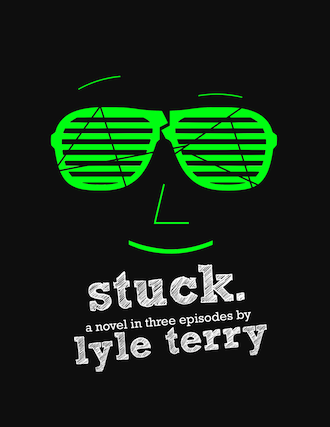 Being over-the-top isn't the exception here, dude, it's the rule!
"And so it begins..."
Advertisement:

Tre Listman is a generally normal teenager with a tendency to daydream and a hidden sense of wit laid under an awkward exterior. Or at least, he was generally normal. But then after an accident involving root beer and a shopping cart, he gets trapped inside the Westland Galleria Mall amidst the chaos between a rowdy group of other kids and a team of rent-a-cops that take their jobs a bit too seriously. What follows is a night full of strange inner monologues, awkward teen romances, giant robots, mobsters and people in duck costumes. And that's just Episode One of this strange tale from Greyson City.

Stuck is a novel series by Lyle Terry that focuses on Tre's (mis)adventures over the couse of three "episodes", which is just the fancy term Tre uses for books. Shout outs are aplenty, and generally there's a high amount of postmodernism involved. Two notable trademarks of the series include the changing perspective over each "act", as well as the extremely self-referential nature of the characters, Nora in particular.

The series and its spinoffs:

After numerous delays, Terry has finally declared the books' official releases will be "whenever I get around to it", but until then, the series is being published on Wattpad.com

Aside from sharing a few passing references to the same work, has nothing to do with the webcomic STuCK.