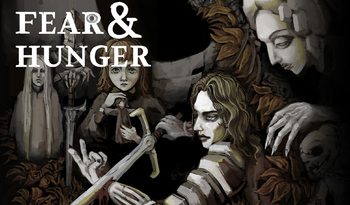 Ma'habre - The city of the gods. You have seen it, haven't you? Since the day you embarked on this macabre quest of yours, you have seen visions of this city in your sleep.
—Release Trailer
Advertisement:

Fear & Hunger is a horror dungeon crawler game developed by Miro Haverinen and released on December 11, 2018. The player assumes the role of one of four adventurers who are after a certain man that had been imprisoned in the dungeons of Fear & Hunger.

A sequel was announced on August 6, 2019. The next game in development is Fear & Hunger: Termina, taking place in the year 1942 after the second great war, taking a jump from medieval horror to modern times, with a demo released on November 20th.

It is available for purchase on Steam

. The demo for Termina is available here