Film / Ultraman: The Next 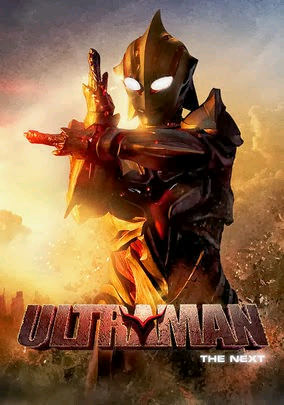 "Thanks to you, I had the best flight ever."
Advertisement:

Ultraman: The Next, simply released as ULTRAMAN in Japan, is a 2004 tokusatsu film, part of the Ultra Series.

An isolated scientific facility is thrown into chaos when a horrific creature tears through its corridors, killing its military personnel. Sara Mizuhara, a leading scientist at the facility, attempts to kill the beast with specially made bullets filled with a special poison. She falters, and the creature escapes...

Shunichi Maki is a First Lieutenant in the Japanese Air Self-Defense Force and pilots F-15 Eagle jets. It's been his dream to do so since he witnessed the "silver meteors" passing overhead as a child, but now he has a new dream. He wishes to be with his family: his wife Yoko and his sickly son Tsugumu. Right before he fully resigns, though, a strange light appears in the sky and he is scrambled with the other pilots to investigate. Unfortunately, his partner has to pull away when the strange light nearly crashes his plane, and Maki then has a head on collision with the light, but little does he know that he is now going to be major part in a battle for the fate of the Earth.

Aliens, possession, giant monsters and lessons about responsibility and fatherly commitments make up this big budget movie that takes a new spin on the beloved character alongside Ultraman Nexus.

Ultraman: The Next provides examples of the following tropes:

Jun Maki: "Flying a fighter jet is dangerous. If you ever go down and crash... that’s it. It doesn’t matter how good of a pilot you are, it doesn’t matter how good of a person you are. Either you live to fly another day, or you die. That’s fate. Meeting you was my fate. But I don’t mind anymore. Thanks to you, I had the best flight ever."
The One: "Burn! Let the humans burn!!"