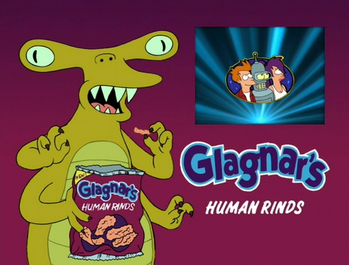 It's a buncha muncha cruncha humans!
"Human beings are mostly water. Their tissues and fluids retain flavors and other residues from their food. Their bones have a brittle quality. Their skin is warm and pliant. Thirst-quenching, well-seasoned, crunchy and yet chewy: People are the Elvis of snack food."
— Nextwave
Advertisement:

The planet Earth in fiction seems to be a magnet for every hostile alien, demon, trans-dimensional being and human-created atrocity known for a very simple reason.

They come for the food.

Humans seem to be the universe's top delicacy and a desired hunting trophy. On a planet covered with millions of animal and plant species, it seems that humans are the only thing here worth eating, apparently because they are sentient.

From a predator's standpoint, humans aren't really worth eating. We are frighteningly inefficient as a food source, given the amount of meat on us relative to our size (compared with other prey animals, humans are kinda bony — you ever try pigeon? Or quail? Think of that, only more bones, more mammalian, and less delicious.), as well as our reproduction rate, and of course, our ability to fight back with our brains, our opposable thumbs, and our general jerkassishness as a race as a whole. We are not even suitable for farming, because neither we are quick/efficient at food-to-meat conversion, nor can we consume inedible biomass such as grass.

Nonetheless, rampaging alien carnivores will bypass an entire herd of beef cattle, bison, elephants, whatever, just to get their chops around a nice, juicy human. Maybe it's because humans are easier to find nowadays?

(And don't even get us started on how, apparently, human and alien biology is a hundred percent compatible — every space monster seems perfectly equipped to digest human flesh which probably never even existed in its native environment — or if not, it never realizes until it's too late.)

A lighter version of the trope, bordering on aversion, is when the aliens can, in fact, eat just about anything... but humans just taste better. In other words, that line above — "humans are a delicacy" — is taken literally; you wouldn't eat it every day, but when you get the chance...

This also happens in just about every zombie movie — the zombies spend almost all their time and efforts attempting to feed on live humans and only humans, which is pretty strange for creatures acting on "pure motorized instinct."

Likewise, in any given werewolf horror movie, the werewolf typically preys on live humans, as opposed to raiding a butcher shop or a livestock farm. In folklore, this is usually explained by werewolf seeking the thrill of murder, not food source; otherwise they'd go after wild deer or rabbits. To be fair, wild wolves will scavenge from an existing food source if available, rather than waste energy hunting for it, and humans behave much the same way.

On the topic of horror genre monsters, the same could go for vampires. It seems like all recently turned vampires just decide, "Hey, let's go kill humans!" They never once consider feeding on other animals, such as livestock, which would surely contain more blood than humans, nor does it occur to them to break into the blood bank of a hospital. A human would be more likely to fight back, and human blood would increase the risk of food-borne diseases.

(However, vampires are more likely to have justifications for this behavior, since their hunger is often supernatural in origin; being dead, they aren't "feeding" in any biological sense, and since Humans Are Special, often the blood must come from a living human. In other cases it's explained by sheer sadism, as vampires become inherent sociopaths as soon as they're turned.)

Makes absolutely no sense in dinosaur movies that has Tyrannosaurus rex pursuing people. For a predator whose typical diet consists of elephant-sized herbivores, it's plain illogical for it to pass over a big, hearty hadrosaur dinner for some scrawny Human McNuggets.

Can also be justified if the monsters are a result of The Virus, if said virus is human-specific and spreads through a bite, since it can be altering its host's mind in order to spread itself around more effectively.

Named for the classic The Twilight Zone (1959) episode (itself based on a short story by Damon Knight) that dramatically shows you cannot judge a book by its title. See I'm a Humanitarian for plain old cannibalism, and How to Invade an Alien Planet for additional reasons why this doesn't work so well. May lead to People Farms. Related to Horror Hunger and, for less intelligent hunters of humans, Super-Persistent Predator. Contrast Monstrous Cannibalism, when creatures cannibalize members of their own social group, not somebody else's. Consuming Passion is for when this trope has sexual undertones. Also see Literal Maneater for when the alien or monster is an attractive female that specifically eats male humans.

The purpose of the processing plant, of course. Plus, one of the healing items you can find is Human Spam.

The purpose of the processing plant, of course. Plus, one of the healing items you can find is Human Spam.