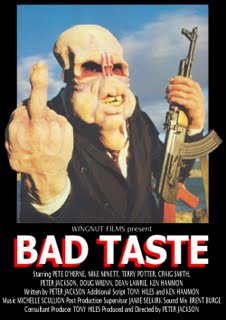 The bastards have landed!
Frank: Just remember, we're only authorized to use violence when there's a threat to the planet Earth.
Barry: And the Moon.
Frank: Yeah, and the Moon.
Advertisement:

Bad Taste is a 1987 No Budget sci-fi/horror/comedy film, the directorial debut for Peter Jackson (who would later give us The Lord of the Rings and The Hobbit films).

It's a splatter movie about a bunch of aliens working for an intergalactic fast-food company, who massacre a small New Zealand town for the meat of its inhabitants. However, one of the townsfolk managed to send a distress call and Astro Investigation and Defence Service sends out The Boys to investigate. The team consists of four members: Barry (the Straight Man of the group), Frank, Ozzy (a trigger-happy duo), and Derek (a sociopath with a slight drooling problem). Hilarity Ensues as The Boys clash with the aliens; Derek goes berserk, a charity collector named Giles is abducted and The Boys have to clean up the whole mess.

Notable for being shot with a shoestring budget during weekends over a period of four years.