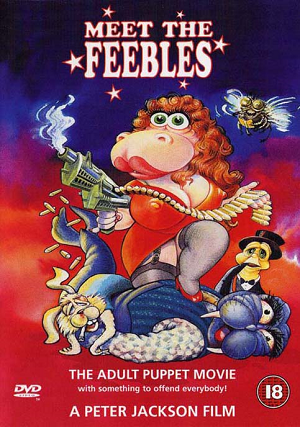 They're definitely not your average, ordinary people.
This is a family show, for Christ's sake!
— Bletch
Advertisement:

Meet the Feebles, a 1989 musical comedy directed by Peter Jackson (yes, that Peter Jackson), is basically the cast of the The Muppets reimagined as depraved, coked-out lunatics. It's set in a world where everyone (with one exception, the contortionist Abi) is some sort of animal, anthropomorphized to varying degrees, and of different sizes, from the size of a small fish to a giant sea creature. The smaller characters are portrayed by puppets, but the larger characters are portrayed by people in costumes.

The story revolves around a Show Within a Show, the Fabulous Feebles Variety Hour. It starts 12 hours before the show is planned to go live, but the actors in the show all have problems of their own. For example, Heidi wonders if Bletch is cheating on her, Bletch needs to get a drug deal through, Harry's been diagnosed with The Big One and doctors say he has hours to live, Robert needs to get the girl of his dreams Lucille, Sid needs to train a new batch of creatures after his old batch is run over by a barrel (and deal with a paternity suit), Wynyard needs to get his Heroin fix, Trevor needs to find new people for the porno he's been filming, and Abi literally needs to get his head out of his ass. All without a single F-bomb dropped onscreen.

And the only problem Kermit had was with being green...

WARNING: Once you have met the Feebles, you will never be able to watch The Muppet Show the same way again. Also, do NOT confuse it with Meet the Parents sequel Meet the Fockers.
Advertisement: