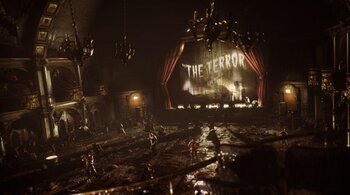 Alas, it seems that the magic of the theater missed this particular place...

Advertised as glamorous night spots in which to experience the latest masterpieces of the stage and screen, some theaters just can't live up to the hype, instead exposing audiences to openly unpleasant conditions - or even serious threats to their safety. Venues such as this may include playhouses, cinemas, amphitheatres, opera houses, or even arenas.

This trope manifests as two distinct variants: there may be some crossover between the two from time to time, but overall, the two categories remain generally distinct.

Compare and contrast the Crappy Carnival and the Amusement Park of Doom, the equivalents of this trope as applied to theme parks.

Not to be confused with The Wicked Stage, which is about performing on stage being seen as disreputable.