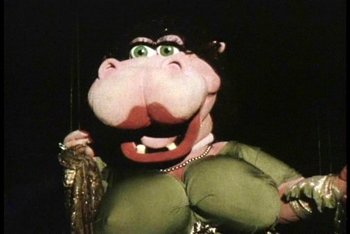 A fat, pink hippopotamus who is the star of The Feebles' Variety Hour.

Although she views herself as Bletch's girlfriend, she is completely unaware of the shallow disgust he has for her. 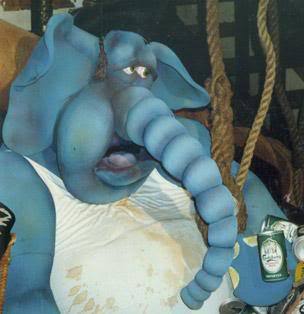 "It's not mine, Sandy! You know it's not!"
Voiced by: Mark Wright

A blue elephant with depression issues who is trying to dodge a paternity suit filed against him. 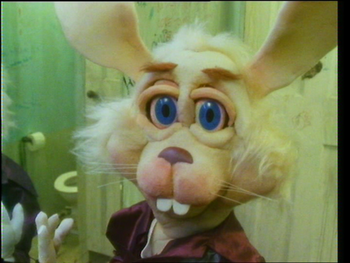 "I wanna go out with my reputation intact."
Voiced by: Ross Jolly

A white hare and the MC for the 'Fabulous Feebles Variety Hour' who is addicted to sex and ends up catching an STD for it. 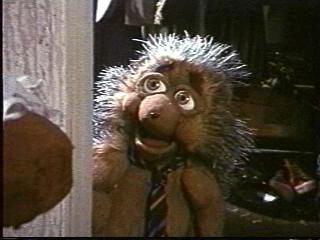 A newcomer to the Feebles troupe, Robert is a young, British hedgehog who soon starts a relationship with Lucille. 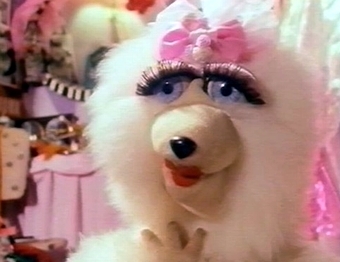 Easily the best female in the movie.
Voiced by: Donna Akersten

A white poodle who is a member of the Feebles Chorus. She begins dating Robert and even gets engaged with him. Unfortunately, Trevor has other plans... 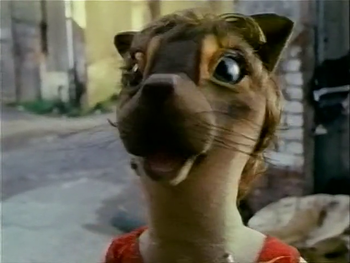 Bletch's mistress, with whom he is cheating on Heidi. She and Heidi end up becoming rivals. 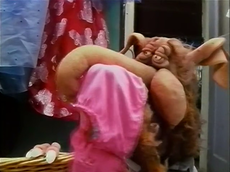 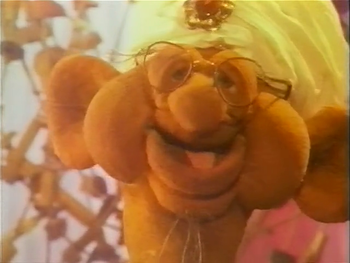 He will never frown!
Voiced by: Ross Jolly

An Indian contortionist whose most recent act results in him getting his head stuck up his ass.

Wynyard the Frog
A knife-throwing frog that happens to be addicted to heroin and was in the Vietnam War. 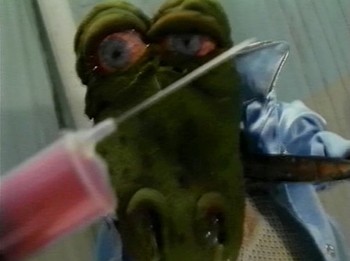 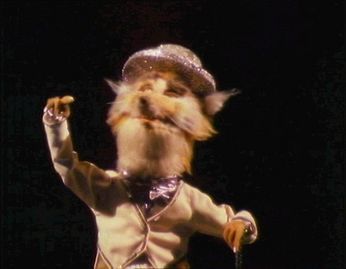 "We've got no alternative but to reinstate my song!"
Voiced by: Stuart Devenie

A flamboyant fox in charge of organizing the show. 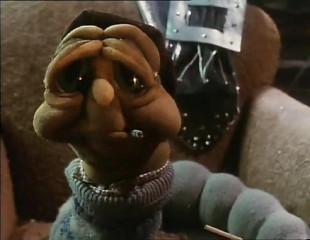 A worm you won't find disgusting.
Voiced by: Peter Vere-Jones

An elderly worm who serves as one of the show's stage managers. He is one of the very few nice and genuinely friendly characters in the film. 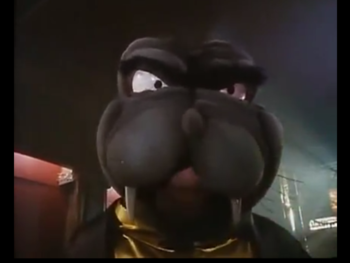 "This is a family show, for Christ's sake!"
Voiced by: Peter Vere-Jones

A dark-blue walrus who serves as the main antagonist of the film. He is the show's manager and is also the leader of a small, drug dealing mob.

Bletch met Heidi many years ago at a night club. Enticed by her voice, he offered to manage her, eventually becoming her boyfriend. However, once Heidi grew older and fatter, Bletch decided he was not attracted to her anymore. The only reason he even puts up with her is anymore because she's the main attraction! 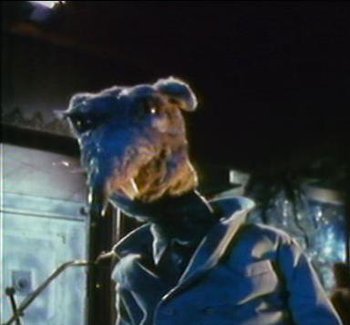 "You may be "Wobert" to your friends, but you're fly shit to me! Piss off!"
Voiced by: Brian Sergent

A gray rat who acts as Bletch's right-hand man. 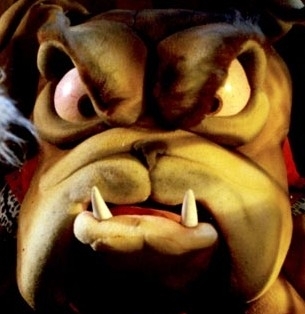 A bulldog who works for Bletch. 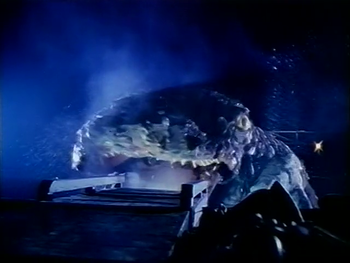 A whale who serves as a drug supplier to Bletch. Like Bletch, he is the leader of a mob, albeit a considerably larger one. 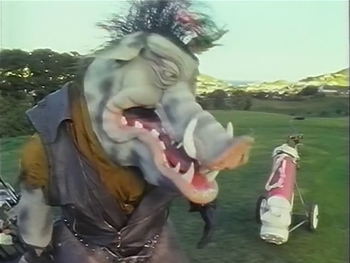 Mr. Big's right-hand man. He sells Bletch drugs and is also the leader of his own gang of crabs. 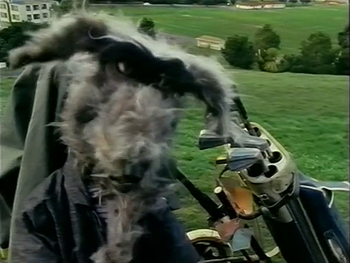 Cedric's agent who sells Bletch borax, telling him it's cocaine. 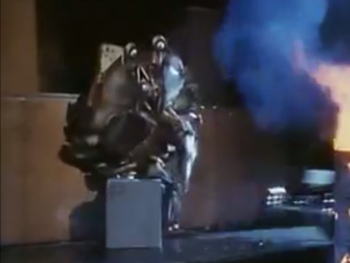 A gang of crabs who work for Cedric. 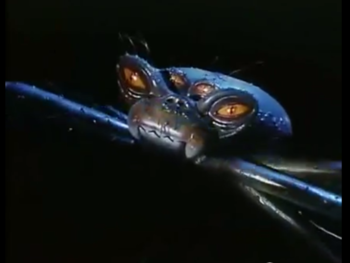 A huge spider who is, from the looks of it, helping Cedric load some crates of drugs onto a ship. 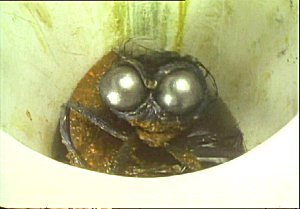 A fly working as a paparazzo that writes all kinds of stories of the Feebles cast. 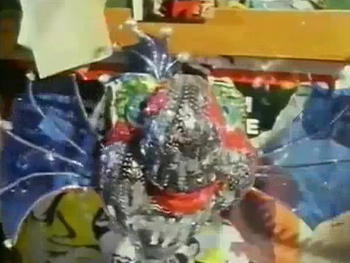 "Is something the matter, Mr. Bletch?"
Voiced by: Mark Wright

A small fish who tries to audition for the Feebles. It... doesn't go well. 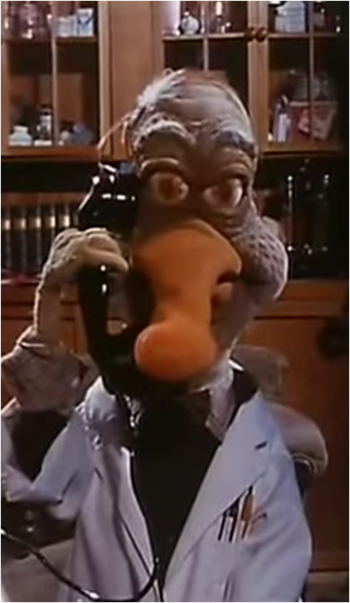 "I'll send ya my bill."
Voiced by: Brian Sergent

A duck doctor who examines Harry.

Madame Bovine and the Masked Masochist
Voiced by: Stuart Devenie and Mark Wright 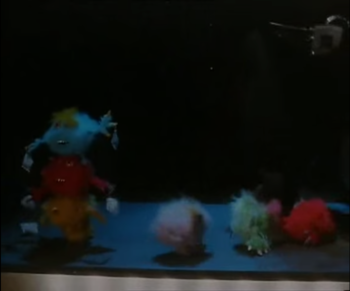 "It took me six months to train that lot!"
Small tribble-like creatures that Sidney trained for his upcoming act... they get crushed by a barrel thanks to Arthur's clumsiness.