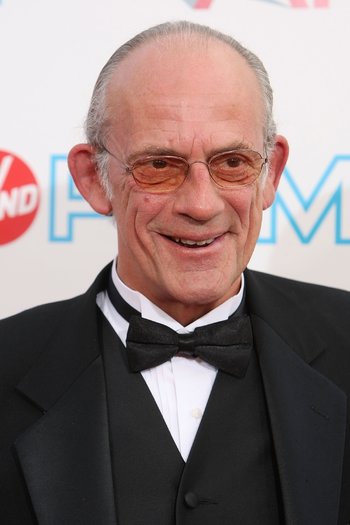 GREAT SCOTT!
"Every role I get is always a challenge. I can read a script and say, 'Oh, I can do that!' and then when I start working on it, I suddenly realize that I had no idea what I was getting into. Then I have to really work hard!"
Advertisement:

Christopher Allen Lloyd (born October 22, 1938 in Stamford, Connecticut) is an American character actor. From Reverend Jim to a Star Trek villain, there's really nothing outside of his range.

He's best-known for playing zany characters or eccentrics (to his chagrin), most notably the crackpot Dr. Emmett "Doc" Brown in the Back to the Future franchise. Among his other theatrical roles are Uncle Fester in the the live-action Addams Family movies and the nefarious Judge Doom in Who Framed Roger Rabbit.

Most of Lloyd's recent roles have been guest appearances or supporting roles, most likely due to his age.

In sharp contrast to his on-screen characters, the real-life Lloyd is a laconic man who rarely gives interviews.

He is not to be confused with an Executive Producer on Frasier and Modern Family with the same name.

Tropes related to his roles