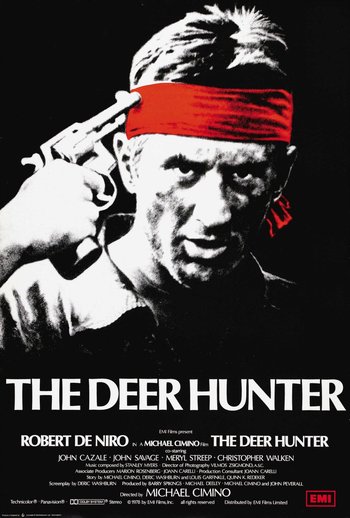 The Deer Hunter is a 1978 film directed, co-written, and co-produced by Michael Cimino, his second film as director and his last film before the infamous disaster Heaven's Gate. It won five Oscars, including Best Picture, Best Director, and for Christopher Walken as Best Supporting Actor.

In the 1960s, three friends from a Pennsylvania steel town — Nick (Christopher Walken), Michael (Robert de Niro), and Steven (John Savage) — are enlisted to fight in Vietnam just as Steven weds his girlfriend, Angela. Nick and Michael, who both love the same woman, Linda (Meryl Streep), celebrate their last days of freedom by going deer hunting. When they do go to war, the experience is very much a nightmare; eventually, they are imprisoned by the Viet Cong and are forced to play Russian Roulette against each other. The trio escape their captors, but they don't escape the consequences of the war.

Sixth and last film for John Cazale, who looks as gaunt as he does in the film because he was dying of cancer, and in fact didn't live to see the film premiere.

The Deer Hunter contains examples of: