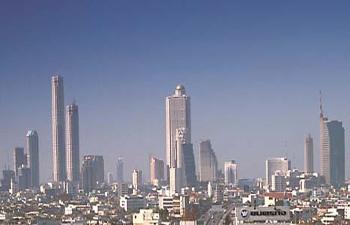 The Bangkok skyline
One night in Bangkok, and the world’s your oyster
The bars are temples, but the pearls ain’t free
You’ll find a god in every golden cloister
And if you’re lucky then the god’s a she
I can feel an angel sliding up to me
— Murray Head, "One Night in Bangkok"
Advertisement:

Bangkok, aka Venice of the East / of Asia, aka City of Angels (no, not that one) is the capital, and the largest, city of Thailand. Also serves as one of the economic centres of Southeast Asia.

Yes, it's been mentioned in many pages, but anyway, Bangkok has the longest city name on Earth. It's:

The city of angels, the great city, the eternal jewel city, the impregnable city of God Indra, the grand capital of the world endowed with nine precious gems, the happy city, abounding in an enormous Royal Palace that resembles the heavenly abode where reigns the reincarnated god, a city given by Indra and built by Vishnukam.

Of course, this is only the full, ceremonial name. Foreigners call it, of course, Bangkok, while the Thais abbreviated it to Krung Thep (thus, City of Angels), or more formally, Krung Thep Mahanakhon.

Nicknamed "Venice of the East" back in the day due to its many canals, many of which have since been filled in as the city sprawls. The canals also double as a flood protection system, however, so combined with the extreme low-lying terrain, this has led to large parts of the city and its suburbs flooding every wet season, most seriously in 2011.

Its modern nickname is "The City That Never Sleeps", which it shares with New York City.

Since Thailand's economy is mostly centered in Bangkok (16% of country's GDP, 5% of tourism GDP), it can look quite different from other cities, especially with the wealth difference.

Bangkok itself has a population of 8 million, but its metropolitan area (including several surrounding provinces which have practically been subsumed into the capital as it sprawls out chaotically) has a total population of almost 15 million. This is not including undocumented immigrants, either from the countryside or neighbouring countries. Bangkok has grown rapidly over the past four decades or so, and its infrastructure has generally failed to keep pace. The city is notorious for gridlock; the average Bangkokian car is said to spend the equivalent of 45 days a year stuck in traffic. More public transport options are becoming available, though.

Bangkok's also quite infamous for its sex industry, which the song "One Night In Bangkok" (from the musical Chess) tells about, rightly or wrongly.

Being the political and economic centre of the country haa meant Bangkok has seen quite a few street battles in its time, including numerous coups (18 since 1932), the protests of 1973, 1976, and 1992, and the current political crisis (since 2006) that pitted "Red Shirt" (no, not those) and "Yellow Shirt" protesters, and their allies in government, against each other. The most serious incident was in May 2010 when the central business district served as a battlefield between the Red Shirts and the Thai Army.

On a brighter note, it is a large, vibrant, and cosmopolitan city. There are cultural attractions like the famous Grand Palace and nearby temples. Lots of shopping malls. Street vendors are ubiquitous. There also seems to be a 7-11 every hundred metres or so.