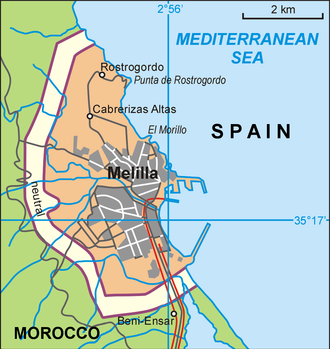 The eastern of the two autonomous cities of Spain in Morocco, Melilla (Berber languages: Mřič, ⵎⵔⵉⵜⵙ; Arabic: مليلية‎, Maliliyyah) is one of the only two inhabited overseas regions on mainland Africa and a port in the Mediterranean just north of Beni-Ensar. Like Ceuta, the territory is claimed by Morocco.
Advertisement:

Originally an ancient Berber village and a Phoenician and later Punic trade establishment under the name of Rusadir, it passed through many hands throughout the centuries including the Byzantines, Vandals and Visigoths. The city was conquered by the Spanish in 1497 and besieged twice during 1694–1696 and 1774–1775 respectively, and in the late 19th century, the value of trade increased as Spanish influence expanded and Melilla became the only authorized center of trade on the Rif coast between Tetuan and the Algerian frontier, with beeswax, eggs and goat skins being the city's principal exports and candles, cotton goods, sugar and tea being the chief imports. A series of campaigns by Rif Berbers against the Spanish in the city occurred in the late 1800s and early 1900s, with the Berbers taking control of the city in the Battle of the Annual in 1921 until the Spanish took the city back in 1926. The city was also used as a staging ground by Francisco Franco for his Nationalist rebellion in 1936, starting the Spanish Civil War, and the last statue of Franco in Spain is still prominently featured here. 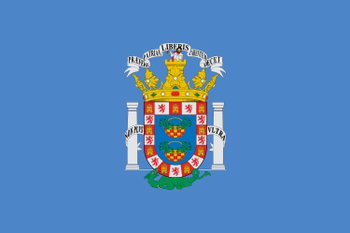 This flag consists of a pale blue background with the city's coat of arms in the center. The supporters of coat of arms are the Pillars of Hercules, an ancient name given to the Straits of Gibraltar from the coat of arms of Spain, and read Non Plus Ultra ("No more beyond"). The top part of the coat of arms reads Præferre Patriam Liberis Parentem Decet ("It is seemly for a parent to put his fatherland before his children").