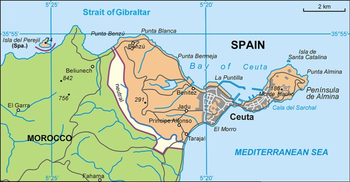 An autonomous Spanish city on the northeastern tip of Morocco and disputed with that country, Ceuta (Arabic: سبتة‎, Sabtah) is one of the two Spanish autonomous cities in Morocco, and is one of the Pillars of Hercules along with Gibraltar across the Strait of Gibraltar. It is the closest city of Africa to Europe, with Andalusia (which the city is culturally considered a part of) and Gibraltar being right across the Strait of Gibraltar and high numbers of ferries from Algeciras in Andalusia traveling back and forth between it and Ceuta each day, and is one of the two populated overseas regions on mainland Africa.
Advertisement:

The territory has long been a important commercial trade and military way-point, with everyone from the Carthaginians to the Romans to the Berbers to the Portuguese taking control of it at different points in history. It is also notable for being the only city of the Portuguese Empire to side with Spain when Portugal regained its independence in the Portuguese Restoration War of 1640. Most of the city's modern day economy is based on its port, as well as industrial and retail centers. 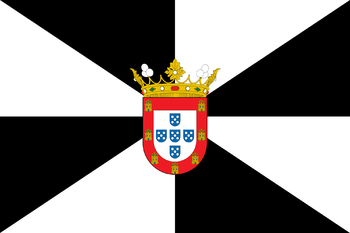 This flag is a black and white gyronny, identical to that of Lisbon to commemorate the conquest of the city by the Portuguese in 1415, with a central escutcheon displaying the municipal coat of arms, which is almost the same as that of the Kingdom of Portugal, showing the seven castles and the five escutcheons with silver roundels.