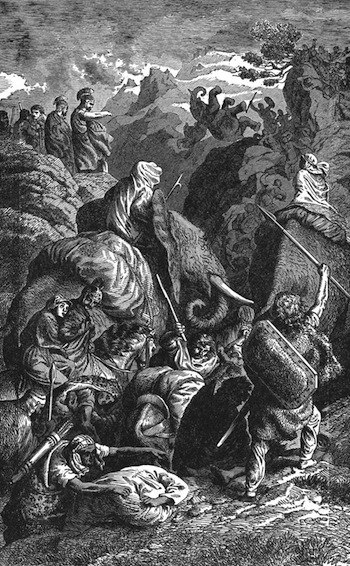 Hannibal crossing the Alps
"The great Carthage waged three wars. It was still powerful after the first, still habitable after the second. It was untraceable after the third."
— Bertolt Brecht, after Germany's defeat in World War II
Advertisement:

No, not wars of Puns.

A series of wars fought between The Roman Republic and Carthage.note We have no idea what it is that the Carthaginians called their state, if they had an "official" name at all. They were, however, also a republic of sorts—a non-monarchical state with nominal popular government actually led by a narrow aristocracy. The difference was that the Carthaginian aristocracy was a merchant aristocracy built on trade and a tradition of diplomacy, while the Roman aristocracy was a warrior-agriculturalist aristocracy built on landholding and a tradition of arms. The Romans called the Carthaginians Poenics (Punic) which is Latin for Phoenicians, of which Carthage seems to have been their latest, most profitable and as it turned out, last offshoot and settlement in what is now Tunisia.note Historic Carthage is more or less where modern Tunis sits; the archaeological site of Carthage is next to Tunis's main airport. (The word "Carthage" comes from Qart-ḥadašt, "new city"). The wars developed organically as a result of competing foreign policies of two major Mediterranean powers, driven by trading routes, and commercial hegemony. But these economic goals eventually mixed with regional, political, and personal grudges and rivalries. The simple explanation seems to be that there were only two major powers left, after the decline and splintering of the Macedonian Succession Wars (which overlapped with this conflict) and this led to a potential realignment of the Balance of Power, and the Western Mediterranean just wasn't big enough for both.

The wars lasted for more than a hundred years (264-146) and were analogous in many respects to later great hegemonic rivalries like the Anglo-French Rivalry of the 18th Century and the Cold War, filled as it is with military arms-race, proxy-wars, attacks on regional states, at the end of which there was only a unipolar political landscape.

As per Polybius, Rome triumphed because of its Republican institutions which somehow managed to bring all the people together under the cause of defending its institutions. The culture of civic patriotism and the citizen-soldier also gave the Romans advantage over the Carthaginians merchant-oligarchy who more or less depended on mercenaries to fight their wars, and moreover faced many mercenary revolts and defections (over being strapped for cash by Roman reparations according to the oligarchs). The Punic Wars were the Glory Days for the Republic and in the views of Roman writers and historians themselves, the beginning of its end, since by the end of it, the city-state governed a huge swathe of territory and land it had no idea what to do with. Almost every conflict that followed can trace itself to the Punic Wars. The grandsons of Scipio Africanus were the Gracchi who wanted to settle Roman Carthage with the poor and likewise extend citizenship outside of Rome. The Senate's refusal to do so and murder of the Gracchi led to the Social War, taking its name from the Italian allies called the Socii, who as Roman vassals had loyally supported the Republic against Hannibal. Now they revolted against it, but the cause, however strangely, came not from a desire to be free from Rome, but rather Rome's refusal to integrate them further and give them Roman citizenship. They wanted to be vassals no longer, but equals. It was a bloody war which killed people in large numbers (possibly up to 300,000), with some arguing it was only slightly less bloody than Hannibal's onslaught. Rome crushed the rebellion, but wound up granting citizenship to its Italian vassals anyway, first as a reward to those who hadn't rebelled, and shortly afterwards even to those who did.

Scipio Africanus arguably codified the model for the political general (Marius, Sulla, Pompey, Caesar) since in his campaigns against the Carthaginians and afterwards, he took it upon himself to pay his soldiers, train and equip them and settle them on land, which made the soldiers loyal to the commander rather than SPQR and likewise created a Cult of Personality around him by investing in art, culture and patronizing Greek ideas in Rome.

Most sources for the history of the Punic Wars are either Roman or Greek. The earliest known source is Polybius, a Hellenistic Greek who became part of Scipio's circle

and was an eyewitness to the Third Punic War and the Fall of Carthage. After him, you have Sallust, a corrupt governor and an ally of Julius Caesar who wrote the earliest surviving Latin histories and then we have Livy, Augustus' court-historian. Still shipwrecks from the Punic Wars have been discovered

as recently as 2010. Technically it was the longest war in history, due to the mayors of Rome and Carthage (which by that point was a ritzy suburb of Tunis) signing a peace treaty in 1985 "officially" ending the war.