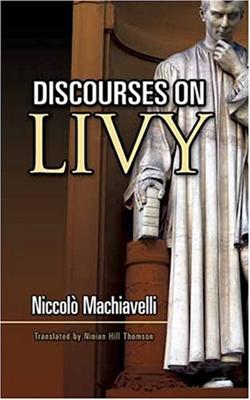 The demands of a free populace, too, are very seldom harmful to liberty, for they are due either to the populace being oppressed or to the suspicious that it is going to be oppressed...
and, should these impressions be false, a remedy is provided in the public platform on which some man of standing can get up, appeal to the crowd, and show that it is mistaken. And though, as Tully remarks, the populace may be ignorant, it is capable of grasping the truth and readily yields when a man, worthy of confidence, lays the truth before it.
Advertisement:
Anyone who studies present and ancient affairs will easily see how in all cities and all peoples there still exist, and have always existed, the same desires and passions. Thus, it is an easy matter for him who carefully examines past events to foresee future events in a republic and to apply the remedies employed by the ancients, or, if old remedies cannot be found, to devise new ones based upon the similarity of the events.
— Niccolò Machiavelli, Discourses on Livy

The Discourses on the First Ten Books of Titus Livy, often referred to as The Discourses or Discourses on Livy, is the second-most well-known book after The Prince (which is to say not very) by Niccolò Machiavelli. It covers the first ten books of Titus Livy's Ab Urbe Condita, as well as throwing in a number of other historical and (then) current examples and advice as to how to run a republic; it also includes some advice on how to run a Principality, and there is some overlap with The Prince in places.

Much of it revolves on the difference between different sets of morality, namely the old pagan morality and the current Christian morality. There is a lot of focus on doing what is necessary, even if it's not good. He also writes quite a lot about virtù (meaning princely virtues like martial valour, skill or cunning) and how a republic cannot last without it, and how lacking it was in the then present day (chiefly because of Christianity). If this sounds familiar, and you've read Nietzsche, it should: Nietzsche read Machiavelli well and took this premise as an important element. His conclusions, however, are rather different.

While he's no democrat in the current sense of the term, he did believe that the masses not only had a part to play, but that their political involvement made a republic stronger and guaranteed liberty.

An older English translation, available in the public domain, can be read here