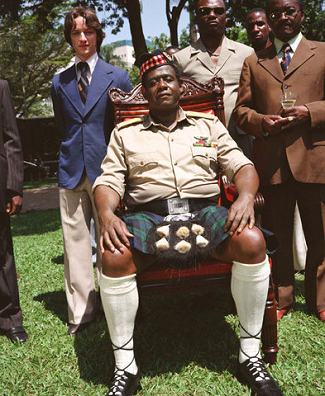 Idi Amin, President of Uganda for life and King of Scotland.
I have seen the things which they have brought to the King out of the new lands of gold... All the days of my life, I have seen nothing that reaches my heart so much as these, for among them I have seen wonderfully artistic things and have admired the subtle ingenuity of men in foreign lands.
— Albrecht Dürer,

on seeing an exhibition of Aztec artifacts sent to Europe by Hernán Cortés.
Advertisement:

Some folks have an uncritical admiration for all aspects (not just one medium) of a foreign culture. Often they're only enamored of The Theme Park Version of the given culture, purposefully ignoring all negative points.

This can lead at times to Hype Backlash against, well, an entire country. Also often leads to Pretty Fly for a White Guy on the part of the fan. Common targets include Japan (mostly on the internet), France (among the intellectuals) and Rome (historically). In real life this phenomenon is called xenophilia, which is a whole other trope in fiction, usually. Often accompanied by Cultural Cringe.

No Real Life Examples on the personal level, please. Cultural or country level examples are fine.

A sub-trope of Cultural Rebel. Compare Pretty Fly for a White Guy, Germans Love David Hasselhoff, Occidental Otaku, and Cultural Personality Makeover. Contrast Creator Provincialism and Cultural Posturing. See also Race Fetish, where this sort of thing gets a bit more...personal. Not to be confused with Foreign Fanservice.