Literature / Dick Whittington and His Cat 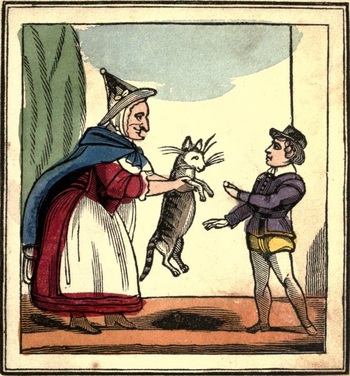 Good old Dick Whittington! He went from his hometown of Gloucester with his cat to London town to find his fortune, as he heard the streets were paved with gold! Of course, that quickly proved to be false - the only "fortune" he found was a job as a lowly servant to a rich merchant named Fitzwarren, and was so disheartened he was ready to leave. But suddenly, he heard the bells of London call out "Turn again, Whittington, Lord Mayor of London!". He decided to stick it through, and after some adventures in Tonga, where his cat killed all the rats in that country, he was given three chests filled with gold, married Fitzwarren's daughter Alice and became Lord Mayor of London!

who was Lord Mayor of London. Few would be shocked to hear that that's about the extent of the truth in the story, but the popularity of the Folk Hero-style Origin Story may be a result of the popularity of the man himself. He was elected four times, a feat nobody has ever equalled before or since. During his reign, he made many beneficial changes to the city, such as building a ward for unmarried mothers at St Thomas' Hospital and passing a law prohibiting the washing of animal skins by apprentices in the River Thames in cold, wet weather because many young boys had died through hypothermia or in the strong river currents. He was also London's sheriff, and a Member of Parliament. He may never have owned a cat (one theory has it that a "cat" was a slang expression for a type of ship used in his merchant business).

The Theme Park Version of Whittington's story started as a play The History of Richard Whittington, of his lowe byrth, his great fortune, and eventually turned into a pantomime, where the Rule of Funny dragged things even further from the truth.

There are a large number of fairy tales that recount it, without any such historical connections. The first known retellings date from the early 1600s.

Tropes in the fairy tale:

Tropes specific to the pantomime adaptations: