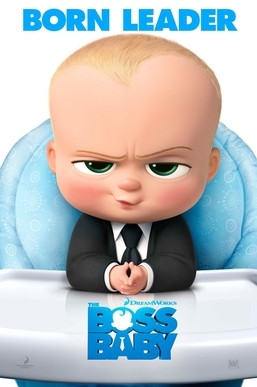 The Boss Baby is a 2017 American animated film by DreamWorks Animation directed by Tom McGrath, one of the co-directors of Madagascar and its sequels. It is loosely based on a picture book of the same name by Marla Frazee.

Tim Templeton (Tobey Maguire) narrates the story of his life when he was seven years old. Young Tim (Miles Bakshi) had his life turned upside down when his parents Ted (Jimmy Kimmel) and Janice (Lisa Kudrow) introduce a baby named Boss Baby (Alec Baldwin), who wears a suit and carries a briefcase around. He also eventually discovered that Boss Baby could also talk, and that the owner of Puppy Co., Francis E. Francis (Steve Buscemi) has a plan which threatens to destabilize the balance of love in the world. The brothers must team up to save their parents and restore the balance of love to the world.

The Boss Baby provides examples of the following tropes: